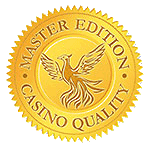 Printed at US Playing Cards on Bicycle cardstock, cut in the traditional way (face up) for easy shuffles, faros, better handling.

The Phoenix Deck uses the standard faces of Bicycle playing cards but takes them a step further for professional magicians. With large format aces a better visibility is guaranteed even on greater distances,

This deck is intended to be the pro magician's working horse for a very reasonable price.

What Card Shark's Says about The Phoenix Deck Project

"The Phoenix Deck is not another deck in the long list of fancy decks that flooded the magic community over the past few years. Nothing against any decks from Ellusionist, Theory11 or others, they look cool and interesting and they find their card collectors, but I did not want to invent "another fancy deck". In my opinion these decks are not usable for everyday magic as they look so unusual that they will easily arouse suspicion. At least lay people will always be more aware of "trick cards", even if the cards have no built-in features.

"That is why the Phoenix deck does not look too modern or extraordinary, as it should not look too suspicious for lay audiences.

"The name of the Phoenix Deck is given by the mythical sacred firebird. It has a 500 to 1,000 year life-cycle, near the end of which it builds itself a nest of myrrh twigs that then ignites; both nest and bird burn fiercely and are reduced to ashes, from which a new, young phoenix or phoenix egg arises, reborn anew to live again. The new phoenix is destined to live as long as its old self. (Wouldn?t it be a great story to start with to do a torn-and-restore card trick?)

"The Phoenix Deck is an alternative to the often used Bicycle Deck, both are printed at US Playing Card Company. The standard Phoenix Deck is just the beginning of a whole new era for card magic. The best way to describe the difference of these two decks:

"In the last few years the limitations of the Bicycle Deck got more and more obvious as the politics of US Playing Card Company changed dramatically for us magicians:

"Even if we think that magic is the most important thing in the world, people outside of our community think quite different.

"This is why I started the Phoenix Deck project, as a magician for magicians and their needs."