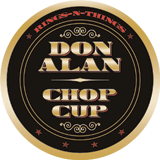 Each cup is hand spun from the original RNT2 Don Alan Full Size Chop Cup tooling from aluminum with a brushed finish exterior and a brushed satin interior.

Michael Farrell 2014-08-19, 11:34
Got my chop cup yesterday. A very nice piece of equipment. Money well spent.
David Chandler 2010-02-19, 15:45
This is the best Chop Cup I've ever handled. This takes a larger load than most other cups, yet the cup doesn't appear to be over-sized. The concave bottom allows you to display the final load without it falling. The workmanship is excellent! If you're serious about your magic and perform the chop cup, this is for you.
Write a review